Many locals consider him the original Captain Tom.  Yet Barrie de Suys, 87, is little known beyond his hometown of Addlestone on the outskirts of London.  Now shortlisted for Bowls England's "Story of the Year 2022" his unsung achievements during Covid may become a morale booster to a wider audience.  Further, his revival of a flagging council-owned bowls club – from five members at the start of 2021 to forty by Season's end – could become a template for other struggling council clubs to follow.

Addlestone Victory Park Bowls Club has endured a long and protracted demise since 2002 when it had a hundred members and Barrie last served on its Committee as a successful Captain.  By 2020 local Councillors began moves to end the subsidy of the Club (effectively closing it down).  They felt it was making little effort to recruit new members.  Increasingly, reports began to surface of unfriendliness at the club and members leaving as a result.  On one sad occasion a newcomer to bowls was turned away at the gates for wearing shorts.

Barrie himself had retired from outdoor bowling in 2016.  He had arthritis in both shoulders and lacked sufficient power to deliver the bowl more than half the required distance.  His medical record also included heart attacks and heart surgery.  In 2018 he had a replacement hip operation which left him with a pronounced limp.

But his legs were generally sound and strong, as was his willingness to serve the local community.  At the start of lockdown in 2020, for everyone's mental and physical health, Barrie decided to draw people into the Park by walking around its 965 metres perimeter for charity.

By October he had completed a staggering 2,400 circuits - stunning the local community who took to cheering him on.

Absent on only three days (due to heatstroke) he raised over £10,000 for the RNIB.  He took several falls on his way but waived away those who told him to stop.  In total, he covered 1,440 miles, far further than from Land’s End to John O’Groats.  The oldest person to complete that trip previously was aged 74 – yet Barrie received only minimal local press coverage for his accomplishment. 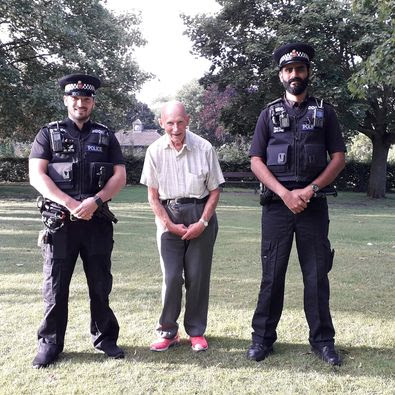 Barrie was deeply concerned about the state of his old club in the Park, of which he was still an honorary life member. The immediate problem in 2021 were the boards around the green which had become rotten and deemed a health and safety hazard by the Council.  They would fit new boards if he painted them with creosote.  This he did, single-handedly, twice over.  This involved two months pre-season work in March and April, working from 9am to dusk.

Meanwhile, the Club decided to invest all its remaining funds in recruiting new players via an Open Day, with free cream teas and subsidised annual memberships.  For advertising, it followed what proved wise advice from Bowls England: to market the occasion in local Facebook groups and use the stock Bowls’ Big Weekend digital images (both of which were free).

For the 25 new members who signed up at the Open Day, Barrie quickly became a totemic figure: the ‘Duracell Bunny’ was by now gardening around the green every day, also umpiring when called upon, and coaching a new Adults with Learning Difficulties bowling group he helped set up.  He was a figure of inspiration and awe.  He drew the new group of players together as the Club’s figurehead like a kind of glue.  All the new players were united by his tangible goodness and leadership.  He became the yardstick by which to measure decent behaviour, in short, he set the standards and they were high: ask not what you can take from the Club but what you can give.  Park-goers were drawn into the Club to see him and give him food and drink.  People joined up because of his local reputation.

Pressure mounted on him to play again, and his frustration grew at not being able to get his woods even the minimum length, right-handed or left-handed.  In recognition of his service to the Club, it gifted him a mechanical bowling arm.

At first it seemed to be wasted precious money.  The bowls were fired off in a wide arc from mid-wicket to extra cover, and still nearly always too short.  But he never gave up and within a month, through hard practice and grit, he learned how to use his new tool with his wonky shoulders, even delivering running shots and the occasional drive.   For new bowlers and weaker bowlers in the Club, giving up had suddenly become more difficult.  If Barrie could play, so should they.  His spirit and encouragement kept them playing.  In July 2021, out of 34 playing members, 28 played, with the remaining six off games, injured.  Amazing numbers, considering over half the Club’s members were new to bowls that year.

A video of Barrie hard at work can be viewed here, click / tap on the link below:

Barrie’s most important contribution of all was to change the direction the Club was heading.  He was the spur to much needed change.  He embodied some new values that seemed to be emerging at the Club.  Inevitably there was some internal tension between old forces and the emergent new forces.  He led the later, looking to revive the still inward-looking club by opening up as a public service for all.  Measured by his high example, old behaviour began to look wrong and out of place, and change inevitable.

Barrie precipitated the creation of a new Committee with ten positions quickly filled by new members.  Perhaps uniquely, he helped push for the Club to adopt three new values, to guide it into the future, which were approved by 87 per cent of the membership in a vote:

“Accessibility - previously known as sport for all”.

“Inclusivity - every player and spectator is made to feel at home inside the Club”.

“Self-sufficiency – helping the Club become asset for the local community as a Council maintained club, not a burden on local tax-payers”.

This was the makings of a successful strategy to survive and recover.  But tactically, the Club was still struggling to recruit local players.  It became apparent that endless videos of match highlights were not making the required impact in local Facebook groups.  People were not interested in bowls per se it seemed, perhaps due to its national image, perhaps due to the product the Club was offering, less likely because people were ‘hunkered down’ at home, an idea which smacked of defeatism.  If this was really true, why were the golf courses suddenly full post lockdown?

Communications with the local community started to change.  Firstly, a suspected lost pet parrot filmed on the Clubhouse balcony hit the mark with locals.  A video of the Adults with Learning Difficulties was also well received.  Then it was decided that Barrie must be the best content, himself.  A tribute video to him went viral locally, seen by 15,000 locals and liked by nearly 200 in the town.  It was also kindly shared by Bowls Surrey, and Barrie finally got some recognition from a wider area and more members joined up. 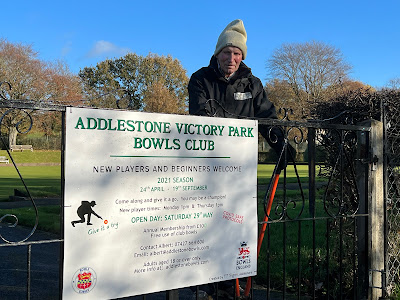 In conclusion, the Club has nominated Barrie for three reasons.  Firstly and most importantly - he deserves it.  Secondly, it’s felt his story and how he brought new players into the game is instructive for others.  And lastly, the Club is critically short of funds for marketing, and public relations like this is always free.  Winning this award would help generate more interest in the Club locally, both in online and offline media.  It would help relations with the Council, and the story will help the Club raise the funds we need to subsidise our memberships and develop in other areas.  In 2022, for every ‘over 60’ member the Club must pay £62.50 to the Council, and for every ‘Under 60’, £125.  These are precisely the same amounts the Club charges in membership fees, so the Club currently runs at a loss.  In future, Addlestone Victory Park must either charge more, difficult in a relatively deprived and predominately working-class area, permanently fund-raise or develop reliable new income streams such as providing food and beverages to local park-goers.

Donations to the club would be hugely appreciated by anyone who wants to support it, directly.  Please call Albert (Club Secretary) on 07427 664 600 or via email: albert@addlestonebowls.com.   Every pound given will subsidise the memberships of new bowlers to the game who cannot afford the fees.

Barrie was elected as the new President of the Addlestone Bowls Club in August 2021, unopposed. 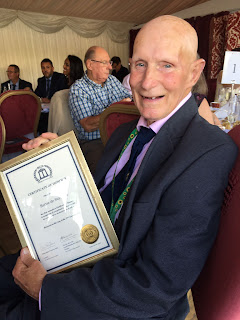